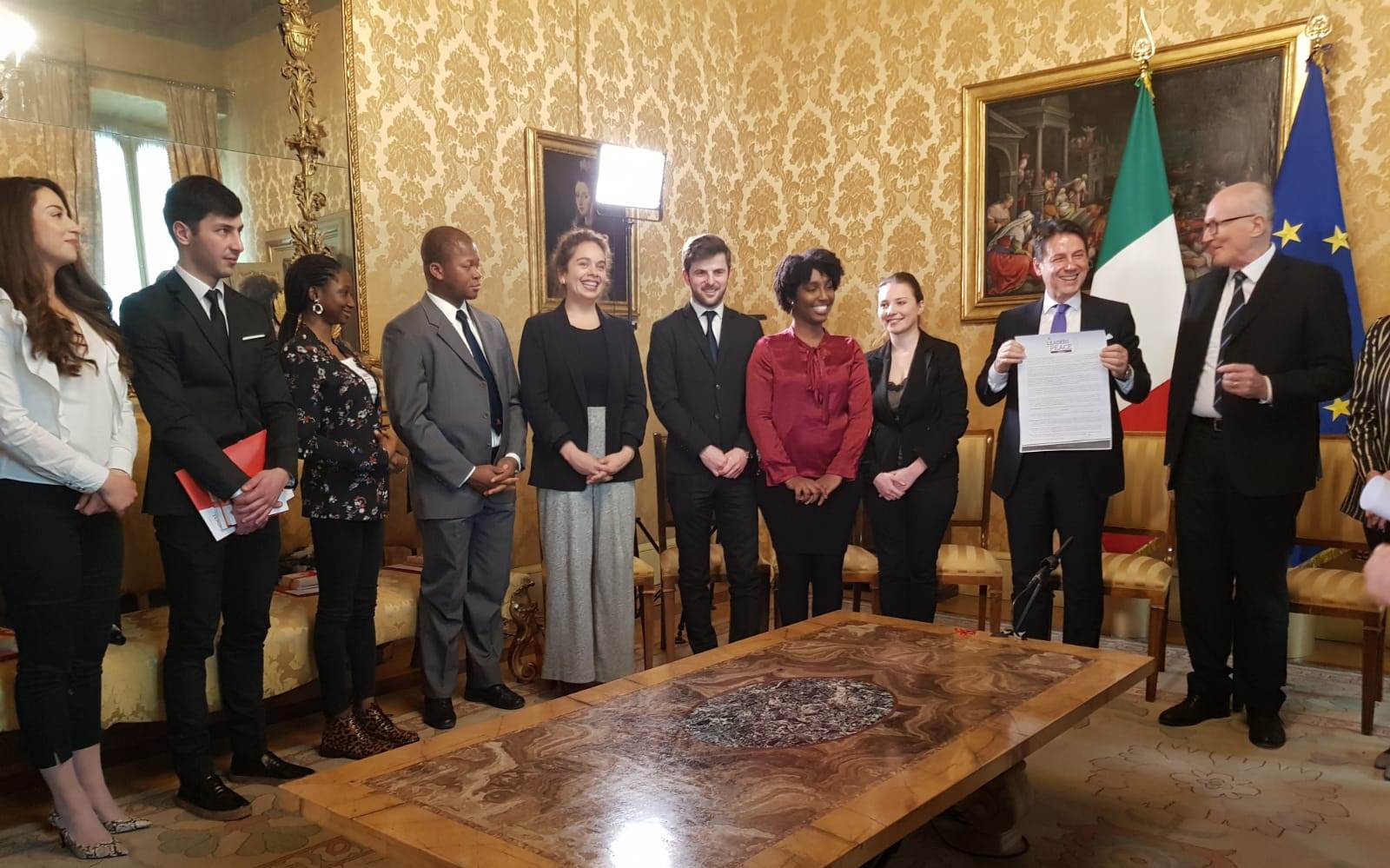 Italy is now the first Country to have pledged support to the Appeal addressed by Rondine to UN’s 193 Member States on the 10th of December 2018, during the ceremony marking the 70th Anniversary of the Universal Declaration of Human Rights. The goal is to redirect weaponry costs from the defence budget to a scholarship for future peace leaders. “I express my full moral support and will not shy away from this request. I am glad to accept your invitation to visit Rondine; during my visit I will tell you how much we will have shifted from the defence budget towards the training of peace leaders.” The statement was made yesterday morning by Giuseppe Conte, Italy’s Prime Minister, as he undersigned Rondine’s Appeal, while meeting with a delegation from the association. For the past twenty years, this organisation has been active in reducing armed conflicts around the world and spreading its methodology for creative conflict transformation at all levels. “I assure you—continued Conte—we have always strived to keep human values at the core of all policies, as I have often mentioned in various contexts, referring to a ‘new humanism’. We must understand humanity, by which I mean that we all have rights by virtue of being born, regardless of where”.

Rondine hosts youth from Countries in armed conflict or in post-conflict. Participants live in a medieval village outside the Tuscan town of Arezzo, sharing daily life with their enemies and studying in higher education courses to become future peace leaders.

Today, Rondine is reaffirming and scaling up its commitment with the Leaders for Peace campaign. The gesture required of world leaders is practical, tangible and, while small, has the potential to change History. This is well exemplified by the story of Maria Karapetyan, a real-life peace leader who, only two years after completing her education in Rondine, became a central figure of the velvet revolution in Armenia and now occupies a seat in her Country’s new Parliament. A civil rights activist, she has brought the voice of Armenian women into politics and opened a new era for the Country. “The velvet revolution was post-modern, fragmented, inclusive. Nobody could have predicted the process. In this sense, it has a lot in common with Rondine, where our work is to continue chasing dreams, until the conditions manifest to make these dreams come true”.

Having received warm endorsement from Italian President Sergio Mattarella and from Pope Francis, who has extended his invitation to heads of state to sign the Appeal, Rondine can now celebrate the first tangible outcome of this campaign, which has as goal practical changes in world peace in the next three years. “The ultimate aim is to end armed conflict on the planet, by spreading the culture of pacified relationship. We are proud that Italy is leading the way — states Rondine chairman Franco Vaccari, — as this is our homeland, and our Method springs from its cultural roots. The Rondine Method has transformed the lives of over two hundred young people, who are active all around the world to bring about significant change.”

As first signatory, Italy recognizes armed conflict as a planetary emergency and acknowledges the need to spread conflict transformation skills among citizens and leaders.